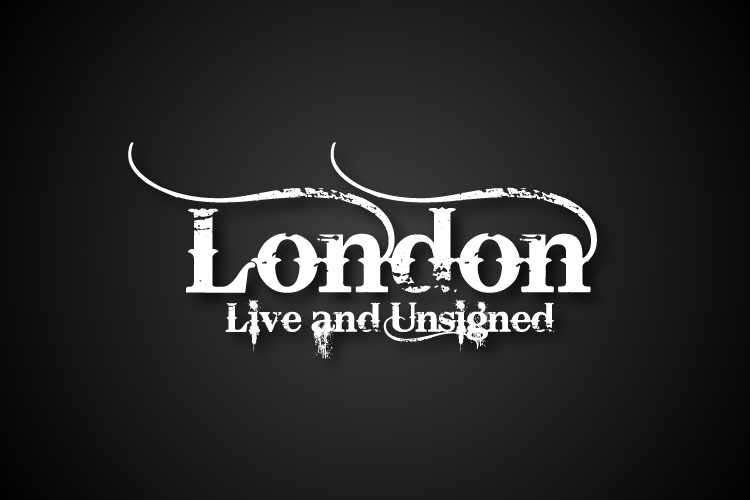 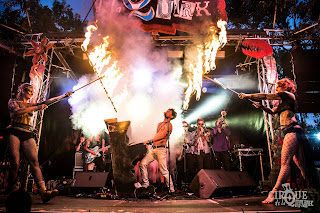 It was the final day of the Isle of Wight festival and if I am honest the summer heat and the 3 days camping was taking its toll but I was rocking on of course. I decided to head away from the main stage and see what some of the smaller stages had to offer and this was definitely the best decision of the weekend. On approaching the very Unique Cirque De La Quirk stage I could hear what I can only describe as a jazz, Funk, Punk and rock mash-up in a circus (sounds fun right). There were flames, aerial performers, and a contortionist on the piano and this my friends was my first Tankus the Henge experience. The frontman Jaz by this point was topless and sweating from all the flames of course and his vigorous piano playing. The sounds coming from the band on stage sounded like there was a mini-orchestra up there and Jaz's vocals were strong, passionate and had a deep bass to them. I knew I had stumbled across something epic and I was excited. It felt like I was in the final scene of The Blues Brothers movie  but it was more bohemian and hopefully, the band wasn't going to be arrested at the end like in the movie.

As the gig went on I started to concentrate on the band and the music more than the visuals, incredible as they were. Jaz is not only a frontman but he is a showman and that makes the difference in any band. He has lots of character, charisma and no arrogance which is the perfect mix. As much as I don't like comparing any musician to another, as I believe everyone is an individual Jaz did remind me of the great Freddie Mercury. I am sure any frontman would not mind being compared to such a wonderful performer. The comparison is also important to me because one of the main reasons I wanted to review Tankus the Henge, and spread the word about these guys is I believe given the right stage and chance they could reach legendary status. The band as a whole have amazing timing and work together well and you can see and feel the fun they have playing together. The brass section of the band just add that pure old time class to the band, they transport you to the roaring 20's in a smoky club in New Orleans.  I have been to see the band a few times now since the Isle of Wight and I can not praise their show and music enough.  But I can only imagine what they could do with a bigger stage/set and thousands of more people in the audience.

Anyone that has been to a live gig knows how important the crowd reaction is, it really can make or break a gig for the fans and the band. At both the Isle of Wight gig and the most recent Tankus the Henge gig I went to in London the crowd reaction was amazing and very positive. However I got to see the band perform in two very different settings and it was great to actually get feedback off the crowd at the London gig. One fan told me that they couldn't take the smile off their face when they watch the band because the music makes them feel so happy. Another fan told me that they just couldn't stop dancing and the gig was making them feel really positive and high on music. By the second set of the night I joined the crowd on the dance floor and soaked up that infectious Tankus the Henge positivity. It was an amazing night in an outdoor London City venue, and under clear skies with the bright city lights of London around us and the view of the iconic shard in the background, people from all different backgrounds danced, laughed and come together for the music. It's nights like these when you forget that we are in a time when London's live music scene is struggling, and get a glimpse of how great it can be again.

Normally when I write reviews I will talk about what genre the band is, I can't do that with Tankus the henge. That's what I love, one minute you feel like you are at a fairground, then you could be jumping around to ska and then you have your jazz hands out. The band are fearless, not afraid to be different and definitely do not follow the trend. To me, they have taken 50's rock and roll shaken it up a bit and taken it where it may not have been able to go in the 50's when the audiences may not have been ready for it. Now maybe the problem is not as many people are appreciating it as much as they should be in a time where live music is suffering. Times have sadly changed, but that's why Tankus the Henge are my saviors of the summer out there touring working hard and not giving up. The band are all multi-instrumentalists which I think helps with the unique Tankus the Henge sound and why their first album self-entitled "Tankus the Henge" is something you have to listen to if you want to be taken on a journey.

Watch this space for info on there forthcoming second album!

Below is a short interview with the frontman of Tankus the Henge Jaz Delorean:

So, let us go back to the start. When and how did the band come together?

Jaz: The start is a blur. No-one remembers the start. It’s like the big bang. Not even everyone believes in it. Some of the band think that we just appeared - you know that stuff, the grit and grime that you find swept into the corner of filthy music venues, well, put a lightning bolt through that, add a bit of Szechwan sauce, and you get a musician.

I heard that some of you guys were from a circus/funfair background is this true?

I have worked on a freak circus, playing the accordion and pulling the knives out of the eyes of the model we strapped to a revolving disc (the knife thrower left, so the truck driver stepped in) and I also used to drive a steam engine which drove a set of galloping horses. The music from the Dodgems, which tended to be Jerry Lee Lewis, Fats Domino, and Chuck Berry mixed itself into a mad trifle in my head, with Johann Strauss wafting in the other ear. It was all pretty weird, and the characters therein, are some of the most brilliant people I’ve ever come across. A few of them make it into Tankus the Henge songs in one way or another.

I have to ask about the name, who came up with it?
And what is the meaning?

If we told you, we’d have to kill you.

Have to keep guessing then!
Well, I definitely don't think I could put you into a genre which is what I love! but who do you think has influenced you as a band?

We’re all from different musical backgrounds although there are large, crashing overlaps. There are really too many to name as we listen to music all day long. Big ones for me are the groundbreaking, innovative frontmen and bandleaders such as Elvis Presley, Freddie Mercury, Cab Calloway and Alex Harvey. Then we all love listening to artists like Tom Waits, Fats Domino, Vulfpeck, Snarky Puppy and Ennio Morricone.
Even more importantly, we get to discover and see bands on the same circuit as ourselves. Two of the most exciting bands around at the moment are My Baby and Shishko Disco who are both creating truly exciting music right now. Go check them out.

you guys tour a lot, what's the funniest stage moment you have had?

Mainly George (trombone) every night. Just watch him if you want laughs. Funny stuff does happen all the time onstage because it’s all live, and non-stop.

Favourite gig or most memorable?

I remember all the gigs. Some are more chaotic than others. Recently, for instance, we played Rhythmtree and had a stage invasion at the end. About thirty audience members onstage singing and dancing. That was pretty memorable.
Also at the Isle of Wight Festival this year, we collaborated with ten circus performers to give the festival a totally unique Tankus the Henge show. There were aerial performers above the stage, fire everywhere, stilt walkers in the mosh pit and a contortionist on the piano. Every gig is memorable and different, but some are very special.

What is your favourite type of venue to perform at?

Big ones. Our performance is a rock show designed for thousands of people, not hundreds, and when we get the chance to do that, as we do more and more, it’s a lot of fun and can be a proper collective emotional rollercoaster for everyone there. It’s supposed to be transcendental chaos.
Small venues are fun, but big venues are really fun.

Jaz do you write all the lyrics?

Yes, the vast majority of them.
Words are really important, and it can take months to finish a lyric. Sometimes it happens pretty quick though, like ‘Smiling Makes The Day Go Quicker’ - that was written in a couple of hours.

Do you tend to write the lyrics then build the song around it or is it always different?

With me, it’s always lyrics first. I like to have a complete lyric before I start writing the music.

How many of you are in the band? When I saw you at the Isle of Wight you were all having a right party up there!

There’s six of us, but that night at the Isle of Wight there was only five. We’re always having a party onstage.

How many instruments do you play between you all?

I’ve never thought about that before. We’re all multi-instrumentalists, so we can all play at least two different instruments. Comes in handy in the studio, and on the road. I play the piano, accordion, and trombone.

Are you all living in London?

No, not anymore. Half the band live in London but the rest of us are split between Barcelona, Stroud, Cardiff, Southampton and as we spend most of the year on tour it doesn’t really matter. I lived in Clapton Pond for years, next to Biddle Bros. Great bar. It used to have a talking parrot named after Reggie Kray which would steal lighters and dive-bomb redheaded girls.

Whats next? What the plans for the future for Tankus the Henge?

There’s an album coming out after the summer. We’ve been working on it for a while. It’s very exciting. It’s a heavier sound than the first album and we can’t wait to drop it.
The future - keep touring, keep the faith, with bigger shows in more countries. We’re expanding Eastwards into Europe and beyond. The future is East. England is doomed at the moment for live music. It’ll probably recover at some point, but it’s going to have to implode first. Grassroots music is being sidelined and railroaded into oblivion and replaced with bland greyness. London was great when we started, it really was, but it’s a disaster right now for anyone trying to create original music and get it off the ground.

Whats the dream?
Never to wake up. Keep dreaming the dream.

Any advice for any musicians just starting out in London?

Sure. Play the jam sessions if you stay. Don’t let it get you down. Go watch your friends play. Support each other. Music is a community. 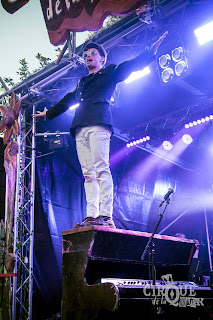 Music on Spotify: Tankus the Henge! 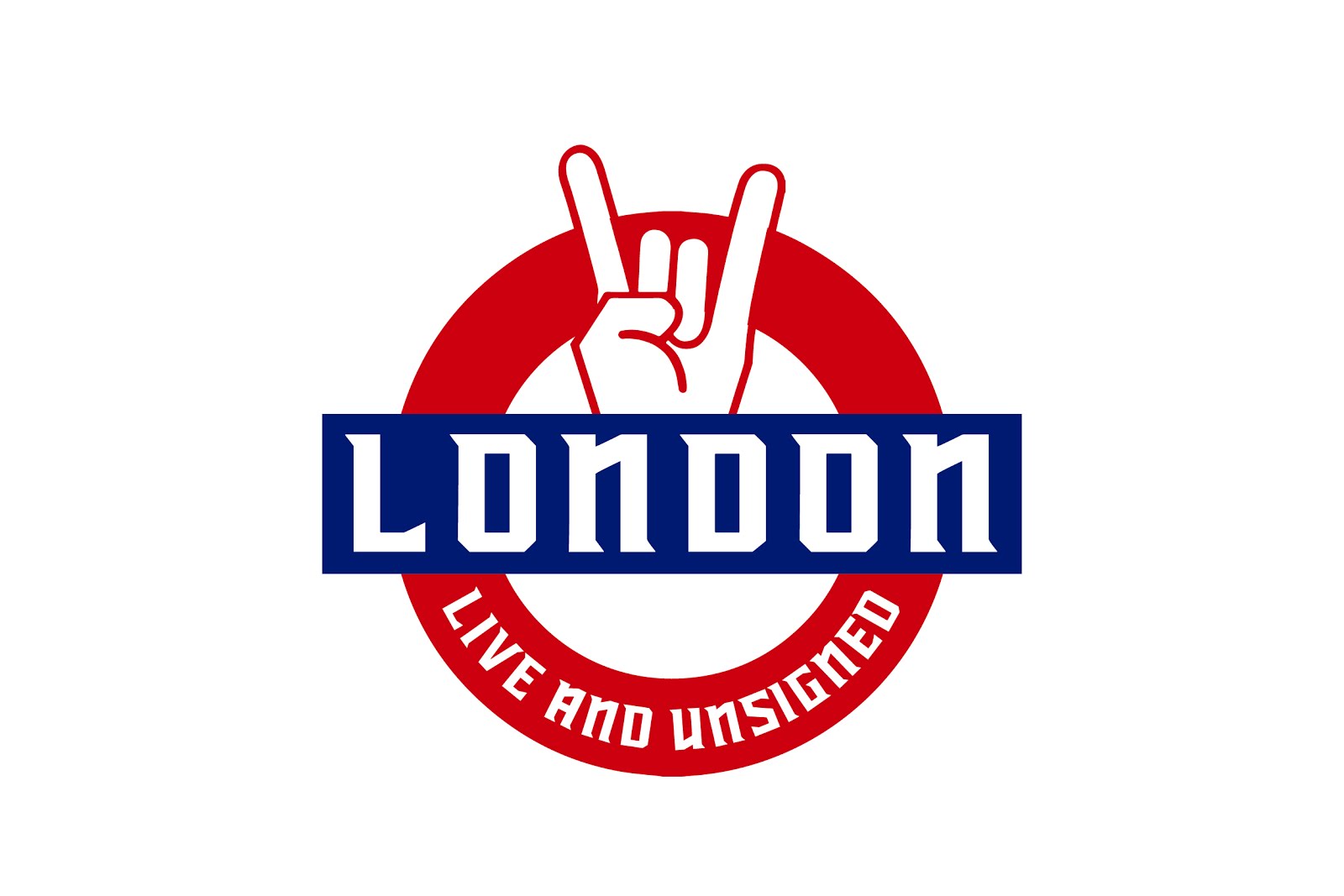 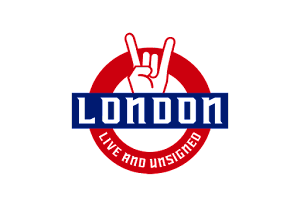